Glutathione is the human body’s most precious antioxidant. It is often called the “Mother of Antioxidants”. Your liver makes tons of it every day. If your detoxification pathways are compromised with deficient cell signaling, inflammation will be present. If you’ve consumed too many toxins or have been exposed to many environmental toxins over a period of time, then you may be highly deficient in glutathione.

One of the most important cell redox pathways is glutathione (GSH) and GSH/glutathione peroxidase (GPX) enzyme system. (1)

You can increase the production and effectiveness of antioxidants such as Glutathione in several ways, some more painful than others.

Lately, it seems the buzz is advertisements soliciting IV infusion therapies that provide glutathione to you through an IV or a shot which runs between $150-225 each time you get one. Many people have turned to this option because the lack of absorption that alternative oral glutathione supplementation capsule may offer. Unfortunately, what many may not realize is that it is a synthetic form of glutathione and a very expensive ongoing treatment protocol.

A less painful and much less expensive way to increase your glutathione levels naturally include: changing your diet and adding 2-4 oz of redox cell signaling supplement to your daily intake.

Glutathione (GSH) can be increased by changing your diet to include foods high in glutathione peroxidase(GPx) such as Avocados, Broccoli, Garlic, Spinach and Tomatoes. 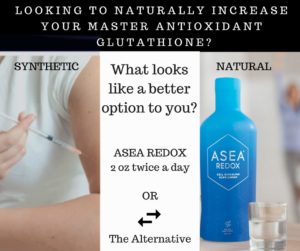 By supplementing your body with more redox signaling molecules you are able to naturally increase your bodies ability to naturally create the antioxidants it needs to keep you healthy and fight the outside environmental toxins more effectively. ASEA REDOX Cell Signaling Supplement turns on the genetic pathways that have shown to increase long term effectiveness of Glutathione. Scientists have seen in-vitro tests show a 500% + improvement in the overall antioxidant efficiency due to ASEA Redox Supplement exposure. (2)

This site uses Akismet to reduce spam. Learn how your comment data is processed.